Fighter McWarrior, better known as Fighter or the Enlightened Warrior, is Black Mage's "best friend" and a master swordsman. A champion of Drownball (by default) he is notable for his childish naïvety, and his many pop culture references. Fighter is a warrior specializing in swords and master of The Twelve Schools of Vargus-do Zodiac-Style Swordplay (Zodiac Kenshido for short). He has an almost single-minded sword fixation, as well as a short attention span. Fighter is one of the four Light Warriors and, of the four, he is the most stupid. Like the other Light Warriors, he has the ability to survive massive amount of slapstick injuries (getting beaten up by a giant, large explosions, etc.), and he ends up on the receiving end of them more than the others.

Role in the Comic[]

Fighter is very naive and remains blissfully unaware of the fact that the Light Warriors are, viewed objectively, a group of homicidal maniacs roaming the country. Instead, he honestly believes himself and the others to be honorable and just. He is so lacking of intelligence that, at times, he lowers the intelligence of others around him with his sheer idiocy. Further, Fighter's thoughts often trail off into territories of "nerd knowledge," such as Star Trek, Transformers and video games. Apart from his intellectual shortcomings, Fighter also suffers from severe arachnophobia and goes into a gibbering panic, even when he's only told a spider is near or on him.

Fighter had trained in Vargus' School (Fighter's Camp '86) at least since the age of six. At a young age, he was expelled from the school for failing to correctly answer the question, "How many schools of Zodiac Kenshido are there?" After leaving the camp, he was about to "give up the blade and embrace his] true calling in life — short order cook!" before literally running into Black Mage. Fighter immediately bonded with Black Mage, despite Black Mage's multiple attempts to stab and kill him (all of which fail miserably either due to Fighter's seeming invincibility or Black Mage's stupidity). He seems to be completely unaware of Black Mage's feelings of hate towards him and, in fact, has often put himself in great personal danger to help his "best buddy" (for example, during the battle with Lich von Vampire), and on occasion avenge him (for example, when it was believed that Black Mage was killed by a giant falling on him). His protectiveness of Black Mage even extends to being willing to threaten Thief and Red Mage Statscowski when the latter openly discussed killing Black Mage within earshot, stating that friends must protect each other and that Black Mage is his best friend, also saying "hint - I can block any attack and kill anything that bleeds" as a response to Red Mage´s and Thief´s plans of killing Black Mage.

He is the creator of the Sword-Chucks, a weapon consisting of two swords attached by a chain extending between the two hilts — a combination of twin swords and a nun-chuck. At first, this is an obvious joke weapon — not only would using it likely lead to the amputation of one's own hands, since nunchucks are wielded holding their ends, but the user would also be putting themselves in severe danger of being hit by rapidly-moving blades. Nevertheless, Fighter successfully used Sword-Chucks to fight Kary, the Fiend of Fire, to a standstill at no harm to himself. He had even successfully developed Sword-Chucks once before, but the timespan in which this happened was obliterated by the wizard, Sarda, who altered reality in order to be able to eat his dinner without preparing it first. His Sword-Chucks have not been seen since the incident, but this could be simply because no enemy has required the amount of power they provide. He did appear to be swinging them around, however, just before his class change, possibly CAUSING his class change, but he may have just been juggling and wielding four swords at once, as he once decided he should learn to do.

It has been strongly suggested that Fighter may actually be more intelligent than he seems. Fighter sometimes has surprising random bursts of intellect; for example, he was able to read the Overcomplicatian (a dead language whose name perfectly describes it) writing on the entrance to Gurgu Volcano, discussed quantum theory and how it "describes how subatomic particles can pop into existence at random" and occasionally reveals moments of deep contemplation in his inner monologue. Further, he offers an amazingly insightful analysis of Black Mage's character and also knows a thing or two about airships. He is also shown to be able to, at times, pick out the glaring flaws in the plans of others, especially those of Black Mage. The least that can be said is that Fighter's mind is more complex than it first appears; in fact, it has been said that "Fighter is the smartest of the Light Warriors. He's just very stupid about it." In one instance, Fighter went so far as to suggest that his stupidity was all just an act, and that he is manipulating the rest of the party for his own evil ends.

In the Castle of Ordeals, Fighter faced the representation of Sloth, who told him he had to stop accepting his sword fighting abilities as given and actively improve on them. He also had to learn to use his mind, as well as his blades; upon this revelation, Fighter immediately cut the Ordeal to pieces because his brain told him "this would be faster."

Afterward, Fighter changed his class to a Knight, gaining the ability to whirl his swords at very high speeds (so high as to create sonic booms), as well as the ability to block attacks from hitting his comrades. Apparently, his intelligence has also increased, as he makes insightful comments much more frequently now. As a drawback, he has still retained his naïve nature.

Fighter suddenly experienced a large increase in intelligence after Black Mage attempted to kill him by stabbing him in the head and using the Skrakoom lightning spell after White Mage kissed Fighter for sorting her life out for her. This, according to Thief, "stabbed the stupid out of him", though Red Mage guessed that the lightning stimulated a part of his brain that he never used. This enabled him to know where the air orb was, but Black Mage stabbed him again (liking him even less when he was in "smart mode") before he could tell Thief and Red Mage. Fighter's super intelligence then tried to move into the part of his brain was his sword skills were, where it didn't last long.

Later in the comic, when the Light Warriors, Dark Warriors and the Other Warriors vote on teams, Fighter is somehow a member of every team. To add to this, one team, "The Fighting Fighters" has three Fighters in it, along with Bikke, as well as a team known as The Auxiliary League of Fighters which presumably consisted entirely of him. When the teams break apart, Fighter standoffs against the other teams. However, since every other member besides himself has left or lost interest, Fighter stands alone, fighting himself. After being put on guard duty as well as formulating 600+ battle strategies against himself, Fighter goes insane and plans to go kill everyone. When Dr. Swordopolis appears, he is left completely lost at the sheer levels of this insanity, such as being overrun by the "imaginary" Fighters from the earlier deathmatch, and Fighter's continuing belief that they must be invisible when they had simply left.

After the Four Fiends were rekilled, White Mage was injured by Black Mage. This caused Fighter to put friendship behind and fight his BFF. However, Black Mage eventually realized that their fight would last forever and solve nothing, due to their equal power, and told Fighter to go away and help White Mage. When Fighter turned away to do this, however, Black Mage stabbed him through the head and through the groin with two black energy tendrils, stating that "I noticed you use swords to block." Sarda has since used some sort of cure spell to revive him, to BM's dismay.

Fighter does little in the later-half with the fight with Sarda, mostly standing around and offering humorous quips (when he actually talks). Fighter shows that he's smarter than he looks by giving a good solution to survive the fall to the ground after Black Mage destroys the Temple of Fiends, but of course, it doesn't work. Fighter then, once again proving his hidden intelligence (or at least combat prowess and rational thought), grabs the Black Mage, Red Mage, and Thief, blocking the ground with his sword before the impact could kill them.

Fighter and the other Light Warriors are now confronting Sarda who has recently nullified the effects of their class changes. This deleveling has apparently made Fighter forget his expert swordsmanship. Fighter was seen stabbing himself in the head with his sword. But even this doesn't seem to have worried him unduly, since he's still later seen with the others. Fighter was last seen somewhere inside a pile of super weapons, and then abandoned by the other Light Warriors to buy some snow-cones (or stubes).

He came back, but all the weapons except for 3 swords were gone as Fighter pawned them off to buy every room in the inn (to get more "room"). This pretty much destroys the little hope the Light Warriors had of surviving the fight with Chaos. He destroys it further by unwittingly goading Chaos into changing into his true form. Luckily for them, White Mage had already killed Chaos shortly before they were going to be destroyed. Since then, he and Black Mage have ended up right back where they started- in the middle of nowhere with no money.

Relationships with other Characters[]

Fighter has shown many outstanding abilities through the course of the series.

The Many Looks of Fighter[]

In the Earlier Comics

After His Class Change 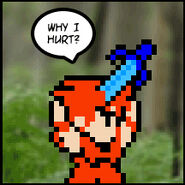 A Wizard did it 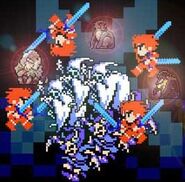 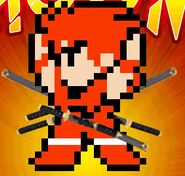 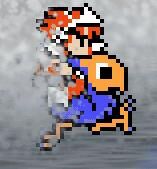 Conquering the Ordeal of Sloth