Edit
watch 01:36
We're Getting Mutants in the MCU - The Loop
Do you like this video?
Play Sound

"The Five Mantis Fist is a Fei family secret that goes back to the founding of this school."
—Po

Fei used the Five Mantis Fist in his time with the Five Dragons. When the group disbanded, he recluses to his dojo and trains his children. However they are unable to correctly learn the style, which greatly angers Fei. Liu Wong spies on the boys, and tries to master the style himself. However, he is caught by both Po and Fei, and after Fei learns of his competency, he tells Wong to become stronger by running for days. However, during the training he is attacked by the assassins Ji Jiao and Ji Bao who chase him back to Fei's dojo. Fei appears, and after ten years of desisting from fighting, he takes up the mantle once more and defeats the assailants. Fei then promises to teach Wong the Five Mantis Fist to recreate the Divine Fist of the Unconquerable Sky. Wong then masters the style in five years, and is sent by Fei to Fang Yun to learn the Tiger Knuckle.

The Five Mantis Fist consists of several different offense and defense moves, made to imitate a praying mantis. The Deflecting Claw is a block that consists of the user blocking the attacker's arm, and then grabbing it with their other hand. The Deflecting Claw is followed up by the Master's Rebuke, and uppercut to the jaw. The Grasping Pincer and the Hidden Grip are both defensive maneuvers that grab the attacker's arms. The Crescent Heel is a swift downwards kick to the head, and the Striking Hook is a quick punch to the chest. Finally, the final form, the Impossible Mantis Fist, a spin with both arms out that sends surrounding assailants flying. 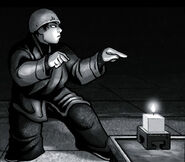 The Grasping Pincer, the Hidden Grip, and Crescent Heel