"You must be the atomic robot they're so proud of."
"And you must be the mook I'm about to punch through a wall."
—Skorzeny and Robo, Vol. 2, Issue 1

Otto Skorzeny is a villain in the pulp action comic, Atomic Robo. A top member of the Schutzstaffel, he leads the Laufpanzers to prevent the Allied invasion of Sicily. He is somewhat good friends with Dr. Vanadis Valkyrie, and both seem to have similar views over the outcome of the war and Hitler's decisions regarding their fields. He has a notable scar on his left cheek, which he got from a fencing match while in his university years.

First Appearance: Atomic Robo and the Dogs of War

During Operation Husky, Robo single-handedly subdued Skorzeny's soldiers as he stormed the base to dismantle the Laufpanzers, which was, unbeknownst to him, was already dispatched by Skorzeny before his arrival. Upon entering the garage of the base, Skorzeny subdues Robo with a hand grenade and a Laufpanzer. Robo manages to escape, in which Skorzeny isn't seen again for that whole event.

A few months later, he is seen aboard a train, chatting with Dr. Vanadis Valkyrie. It is here that we see when they both knew that Germany was losing the war, and that Hitler was spending recklessly, not funding enough to Vanadis' research. It was then that Robo and The Sparrow burst into their car at the same time as they fell into their trap. While the two protagonists got busy with an ambush of soldiers, Skorzeny and Valkyrie escaped the train aboard a compact jet, firing rockets at the nearby bridge for the train to fall and eliminate the occupants inside.

Inside a heavily-guarded fortress, where the Wehrwolf Formula was being used to create Brutes, Skorzeny encounters The Sparrow at gunpoint, commenting that he was impressed at their idea to switch targets. He then reveals to the spy how Vanadis had killed his brother, also codenamed "The Sparrow", with her army of Brutes, hoping to tear open her emotional scars before killing her. After shooting the spy, he confirms it to Vanadis and agrees to self-destruct the facility to prevent the formula from falling into the hands of the Allies. When he turned around, The Sparrow had barely escaped with an armored jacket. Later, when the four encounter each other (with Sparrow threatening Skorzeny at gunpoint this time), Vanadis feigns a self-destruct timer as Skorzeny pulls out a lightning gun to incapacitate Robo. The two villains escape again, leaving Robo and Sparrow to leap off the fortress as it explodes.

As the war was ending, Skorzeny was ordered to oversee the progress of the Weather Cannon. When Robo's raid of the facility failed, he used his body as a power source for the cannon, removing his legs to be used for further research. Before the cannon was even used, James Milligan storms in to rescue Robo. Skorzeny escapes, but reappears again when the two fly away on a Kolibri helicopter to stick an anti-tank bomb on the hull. He then falls to the sea, where he was never seen for a very long time.

The last time Skorzeny was seen was in 1971, when he invited Robo to a café in Madrid, Spain. An old man dying of cancer, he hands a lightning gun to Robo and tells him that he killed Tesla and took his patents, hoping to die a soldier's death. Enraged, Robo was prepared to shoot him, when he held back and saw through his lies. Skorzeny was to die in bed alone, and in agony, in July 7, 1975.

Otto Skorzeny is based on a man from real life with the same name. The real Otto Skorzeny was also an SS Commando, famous for leading the raid that broke Benito Mussolini out of confinement in Italy. 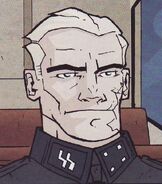 Skorzeny aboard a train.

Skorzeny having enough of Robo and The Sparrow.
Community content is available under CC-BY-SA unless otherwise noted.
Advertisement