"In the arena of logic, I fight unarmed."
—Red Mage

Red Mage Statscowski is the delusional strategist of the Light Warriors and self-proclaimed "fractactical genius". He considers himself the most intelligent of the Light Warriors, but in reality his intellect is mostly, either theoretical or from another plane of existence (another videogame) and without use in the real world.

Red Mage believes to live in a world which obeys RPG rules, particularly tabletop, although he does make references to console and MMORPGs. As a Red Mage, he prides himself on versatility, although he rarely demonstrates any significant abilities in combat or spell-casting. In an earlier comic he claims he does not like to cast spells as this would lower his versatility, but as White Mage pointed out to him in episode 100, "a living Red Mage minus one Cure spell is more versatile than a dead Red Mage". Red Mage carries a character sheet with him listing his stats, which he is able to erase and rewrite whenever he wishes to give him proficiency in whatever area he desires. However, more often than not he acquires skills that are useless for the problem at hand, such as his use of the Animal Husbandry skill when attending to the airship deathtrap. Red Mage is also mindful that subquests and sidequests usually reward the adventurer with great items, the more difficult the quest the better the reward. However, true as this may be in video games, in 8-Bit Theater the rewards for their quests are either useless or non-existent, something Red Mage doesn't seem to have noticed. In Episode 898. Thief says that Red Mage has a "Raging Mage Boner" for Dragoon, but Red Mage denies it (somewhat).

As mentioned, Red Mage serves as the strategist of the group, creating plans at a moment's notice to solve whatever dilemma the Light Warriors may be facing. However, his plans are usually incredibly stupid, implausible and outrageous, usually disobeying the laws of physics entirely. Red Mage however, believes all of his plans to be foolproof and ingenious. His plans, as flawed as they may be, often seem to work. Among other triumphs, Red Mage has single-handedly bred a Gold Chocobo, has come up with plans to defeat the Four Fiends, and has managed to make Fighter kill a dozen dragons by "giving him an idea he was too stupid to know he [can't] act on". To his credit, Red Mage does take his own abilities, and the abilities of his teammates, into consideration for his plans, but knowing the way his plans tend to go, the other Light Warriors don't listen. In one comic, when Red Mage is concocting a plan to get the Light Warriors off an island, Thief says that "he's liable to destroy the island, and claim it's a success because we're no longer on it!"

Red Mage's past is unclear, due to having false memories created by Thief. It is known that he is apparently the last of the Order of Red Mages, due to them testing attacks and spells on each other. He has a patron deity called "Megahedron", a red twenty-sided die with sunglasses, but Red Mage himself does not believe Megahedron is real and is merely a result of his "three-point hallucination flaw". Due to the manipulative prowess of Thief, Red Mage believes he was neglected by his father, and as a result of this is prone to randomly cross-dressing as a woman named "Deborah".

Red Mage, believing himself a genius, faced the sin "Pride" in the Castle of Ordeals. The Ordeal told Red Mage that hubris was his flaw, but Red Mage was adamant that he had calibrated his stats to make himself flawless. After many futile attempts to prove this, he admitted he had been bested. The Ordeal passed him for his submission, and vanished. However, Red Mage then gloated about his victory, completely missing the point of the lesson the Ordeal was meant to teach him.

Red Mage first appeared out of nowhere when Thief commented on White Mage's versatility. After realizing there can only be 4 Warriors of Light, a vote-off is held, although it eventually comes down to Red Mage and White Mage. Thief and Fighter each vote for Red Mage, thus creating the official Light Warrior team.

Red Mage is mostly seen as useless in the earlier comics, although his Hypercube/summoning materia allowed for the Armoire of Invincibility to be easily stored (which would later be used in the fight against Vilbert von Vampire). His disguise skill would eventually come in handy when the Light Warriors first enter Elf Land and he uses an illusion spell while they travel through Dwarf Land.

Red Mage would finally prove his worth in the fights against the first three Fiends. His plan to put Lich's soul back inside his body worked (along with Thief and Fighter's help), allowing Black Mage to banish him to Hell in one piece. During the battle with Kary, Red Mage catches her off-guard and traps her within his Bag of Holding, casting Ice-9 on the dimension, which was quickly crushed by White Mage, destroying the Fiend and all the wealth that Thief had accumulated in the course of the storyline. In the beginning of the Light Warriors' fight with Ur, Red Mage is eaten just as he is about to reveal a krakenoid's only weakness. Just as it is about to kill Fighter and Thief, Red Mage slices Ur from within.

During the Light Warriors' return to the Temple of Fiends, Red Mage freezes Fighter, Thief, and himself to prevent them from freezing to death by a Frost Dragon's breath attack. This eventually leads to the 3 teaming up with Drizz'l. Red Mage later encounters an 'eye thing' which transforms him into a fellow monster. He eventually recovers by casting Polymorph: Self, although he still struggled with hiding it and was constantly paranoid about it, however by looking into the datasphere, and briefly going mad, the datasphere's knowledge managed to cure him of his affliction. After Black Mage's election for new team affiliations, Red Mage briefly ends up in "The Universe Obeys Arbitrary Laws Party" along with Vilbert, Cleric, and Fighter.

In the more recent comics, Red Mage seems to have developed some sort of "standing coma." Black Mage states wishfully that he is dead, but Thief argues that a standing coma is much more likely than standing in death. Red Mage is actually stranded in his subconscious with Megahedron. However, upon hearing that the four fiends were going to attack the Light Warriors (read: Fighter) together, which is in violation of the One Boss at a Time Act, he awakens to demand that they attack separately. Then he joins Thief in belittling Black Mage, only to learn that Black Mage has far more power than believed as he reveals his evil prowess by stabbing the Four Fiends in the head and then exploding in a web of black, evil tendrils of energy. One of these hits White Mage, and while Fighter and Black Mage argue, Red Mage sees to White Mage. Fighter and Thief are both bested and Red Mage takes a stance alone against Black Mage, but before the two can fight Sarda intervenes and revives the fallen in preparation for a final clash. In the battle against Sarda, after several failed plans and attacks, Red Mage teleports himself and the other Light Warriors into the realm between his portable a-hole and b-hole and proceeds to reveal that, thanks to his glimpse into the Datasphere, he knows how to destroy everything in existence - this includes how to destroy Sarda.

Apparently the way to destroy Sarda is to cast every spell in existence, and let Black Mage blow up the Temple of Fiends. However, that doesn't work as Sarda had used the power of the orbs to absorb the evil of the Black Hadoken. The now super evil Sarda nullified the class changes of the Light Warriors before overloading from too much power and becoming a portal for Chaos to come into their world. The team readies to fight Chaos, after a very short betrayal from Black Mage, but Red Mage noted that Sarda deleveled them but they don't know by how much. Black Mage says to try a spell but nothing happened which Red Mage remarked as the sound of losing in the first round. Black Mage responds saying Chaos may be a wuss. He is just a head sprouting out of Sarda's face, he could be in a larval form or something. Red Mage asked if they maybe had a chance. Chaos said they could just ask. Red Mage responded with a "Really?" but Chaos just said he never said he would answer, or that his answer wouldn't involve killing them instantly. Red Mage wishes for at least one villain who isn't a jerk about killing them. Red Mage used his "logic" to come up with the fact that the team must win since Sarda is from the future and would not be there to take revenge if the world ended, but Chaos said it had better not create a paradox since he would just HATE to have his way. Red Mage has struck a deal with Chaos, letting him postpone doomsday for 24 hours so the team can train and hopefully get their levels back (he wanted eternity, but oh well). Since Chaos was defeated offscreen by White Mage's party, he has formed a support group for sole survivors of mysterious organizations currently consisting of himself and Dragoon. He called it "Sects Buddies", which may explain the low membership.

Relationships with other characters[]

Black Mage Evilwizardington: Red Mage is Black Mage's second most frequent victim, and is often stabbed in the head, although the two can be somewhat friendly when discussing topics such as magic and superheroes/supervillains. Despite this, Red Mage resents Black Mage for destroying his hats (which Black Mage claims are dorky), and refuses to heal him.


Thief: Red Mage seems to view Thief as his best friend, although the relationship is one-sided (much like Black Mage and Fighter, perhaps even more so). Thief constantly attacks Red Mage with his ninja abilities and has scarred him by inserting false memories about his father. Despite this, Thief seems to view Red Mage as one of the only members on the team that he can have a normal conversation with (when he's not coming up with one of his ridiculous plans at least).


Vilbert von Vampire: Vilbert acts as a rival of sorts to Red Mage (although there are no official parallels between the Light and Dark Warriors). The two settle things by rolling dice (Red Mage) and rock-paper-scissors (Vilbert).


Sarda: Red Mage seems to respect Sarda for his power and status as a quest-giver, defending his actions from Black Mage and Thief's beliefs that Sarda just wants to kill them.

Red Mage has limited combat abilities. He does know some spells, and can wield swords with moderate skill, much like the true Red Mage of the Final Fantasy series. After his class-change, Red Mage has the ability to copy the actions of his teammates once after seeing that action performed. However, he largely uses the mimic ability to mimic himself to increase his own attributes and abilities, although logically, this is impossible. Red Mage has also been seen casting the following spells:

Red Mage's most prominent gag is his cross-dressing. Other gags include:

The Many Looks of Red Mage[]

On His Character Sheet 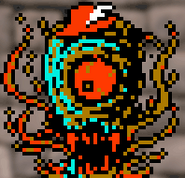 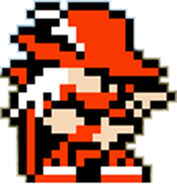