""Wizard"? Are you kidding me? Wizards do parlor tricks; I throttle the heavens!"
—Sarda

A bearded sage who is as old as, or older than, the universe. He sends the Light Warriors on a number of suicide missions quests for the Orbs of Light.

He calls himself "the wizard who did it."

Sarda is the self-proclaimed "Wizard Who Did It"[1] and sole occupant of the Circle Cave in 8-Bit Theater. Sarda has played a vital role in the story as he drives the Light Warriors to recover the Four Orbs, often using forceful means; to what purpose is unknown, but it can't be good judging by that evil laugh of his though saving the world and stopping Chaos is the assumed goal. Sarda is an all-powerful wizard who, among other things, can reverse and stop time, as well as manipulate reality itself. He will readily do so out of sheer boredom or just to irritate others (Black Mage refers to him as an "omnipotent jackass"). For example, humanity used to have 36-hour days, but Sarda reduced them to 24 just to make everyone hurry up. Sarda is also responsible for accidentally deleting an alternate timeline where the Light Warriors actually save the world. He erases this timeline when he tries to cook macaroni without waiting for the macaroni to actually cook.

He never stops to think about the consequences of his actions, citing that he wouldn't be the Wizard Who Did It if he did. At one time he let the Light Warriors travel through a desert, a forest, over a mountain range and across an ocean to rest in front of his cave, and he teleported them inside. When Black Mage angrily asked if he could have teleported them back at any time, Sarda replied "Not at any time. Only when I wanted to". He often uses the slightest of reasons to torture or destroy the Light Warriors, usually Black Mage, by teleporting the group thousands of feet in the air, then teleporting them just above his cave floor, only to heal them and repeat the process, or even unmaking the missing fifth Light Warrior, Bard. However, he does seem to like Fighter, even giving him candy at one point.

Sarda also seems to have a hatred of White Mage, due to the fact that he accidentally sent her back to the creation of the universe, which messed up his earlier self's attempt to control creation, thus ruining his original plan of erasing the Light Warriors from existence when his younger self would reach that point. This meant that when he finally met White Mage many millenia later, he sent her to a pocket universe to keep her out of trouble, without realizing that the 'pocket universe' was actually his own before it was made, creating a stable time loop.

In his actual first appearance in Episode 300: The House Always Wins before he met the Light Warriors, it was shown that he was inappropriately meddling in the time stream in order to eat his meals without having to prepare them, and during this time line the Light Warriors had successfully become the mighty heroes that fate had foretold, but due to his unnecessary meddling he accidentally undid that time line and instead reverted it back to its crude and very violent state. He showed no remorse whatsoever.

"This...this isn't right...this...will not be...I am Sarda. And I am older than time. I possess a power beyond mortal imagination. My plans will not be undone by such amateur-hour horse shit as absorbing too much power and exploding. I am Sarda. My will be done."
—Sarda

It was been revealed in Episode 1133: Pretty Obvious Really that Sarda was once the Onion Kid. This explains why he actually protected the kid, and why he hates Black Mage so much, as well as the other Light Warriors for not stopping Black Mage (except for Fighter, who he claimed was just a casualty). When asked why he sent them on quests to increase their power, Sarda states that he wanted them to know that no matter how powerful they are they can never defeat him. However, after a cunning distraction by Red Mage, Sarda is blown away by Super-Evil Black Mage's Helldoken, throwing the Light Warriors into the air as well. However, Sarda absorbs all of Black Mage's dark aura, and decides to let them live, on the grounds that killing them is no longer enough to make him happy. He also states that he'll be doing random horrible things to them from time to time. However, shortly thereafter, the combined arcane, elemental, and evil energies he absorbed overwhelmed him and caused his head to morph into a grotesque monster turned him into a portal into the world for Chaos. This head is based on the demon king Fomortiis' head from Fire Emblem: Sacred Stones.

In addition, he is implied to be aware of Blue Magic's existence, if not capable of it, due to his creation of a spell that, even when copied using Blue Magic, cannot be turned against him. He also implies that he is capable of spells with the same effect corresponding to each of the Light Warriors.

The Many Looks of Sarda[] 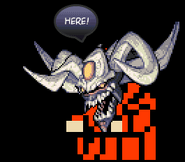