The Sparrow is a character in the Atomic Robo series. She is one of Great Britain's top covert agents, being adept in stealth and combat. She had been tracking down the notorious Dr. Vanadis Valkyrie before World War II began. She has a particular dislike for Robo, due to him interfering with her mission. According to dialogue between her and Otto Skorzeny, The Sparrow is a secret agent name bestowed through a family line of operatives regardless of gender, meaning that in the future, the current Sparrow encountered may be a descendant of the last one. The one that Atomic Robo encountered during World War II, according to the concept art, was named Margaret Weir.

First Appearance: Atomic Robo and the Dogs of War

First appearing in said volume and issue, she stumbled into Robo while they were both carrying out somewhat similar missions, her attempting to assassinate Dr. Vanadis Valkyrie while Robo attempts to do the same to Skorzeny. They both fell into a trap set by the two villains and had to begrudgingly work together to get off the train they were on before it plummeted down to their doom, with Skorzeny and Valkyrie escaping harm.

After some bickering, they find Valkyrie's secret fortress. Inside, she had been working on a genetics project called the Wehrwolf Formula, which turns human subjects into Brutes, hulking, muscle-bound ogres with exceeding human limits of speed, strength, agility, and endurance, as well as the power to heal at a tremendous rate. Storming the base, they swap objectives and encounter the two villains again. While Robo was busy with Valkyrie and her Brutes, Sparrow encountered Skorzeny. He revealed to her that her brother, who was also a covert agent of the same name, was killed by Valkyrie's Brutes and shot her, presuming her dead, but her armoured jacket saves her and she attempts to kill him again. The two escape once more, activating the self-destruct sequence to rid of any evidence of the formula. This leaves Robo and Sparrow to escape the base before it explodes. In the end, the two vow never to work together again.

Brian Clevinger has stated in past blog entries that he plans to make another appearance of the Sparrow somewhere around Atomic Robo and the Flying She-Devils of the Pacific.

Before Sparrow became a full-fledged character, Brian Clevinger and Scott Wegener were deciding on featuring a powerful, "cool" female character in a World War II setting along with Robo for the issue. Brian had chosen Virginia Hall, but she did not fit in his written scripts properly, and so they had to create an entirely original character, which apparently, was a pain for Scott to draw due to the structure of her hair. 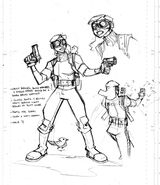 Add a photo to this gallery
Retrieved from "https://8bittheater.fandom.com/wiki/The_Sparrow?oldid=20824"
Community content is available under CC-BY-SA unless otherwise noted.