White Mage is an expert healer and was originally a candidate for the Light Warriors. She would have been accepted as a member of the group if Red Mage had never made an appearance.

White Mage (sometimes called WM for short) is a major, recurring character in 8-Bit Theater. She was initially proposed to be a Light Warrior by Black Mage, but this was rebuffed by the rest of the group to make room for Red Mage, much to Black Mage's anger.

White Mage often shows up when one member of the Light Warriors is in need of healing, most often when Black Mage has killed Fighter or when Red Mage does not want to heal himself from a mortal wound because that would reduce his versatility.

White Mage and Black Mage have a somewhat fractious relationship. Black Mage is in love with (or more accurately harbors a deep lust for) White Mage, but White Mage rejects his intentions because of his being evil, and at one point Black Mage believes she has more affection towards her bodyguard, Black Belt. She has broken her White Mage's oath by gravely wounding Black Mage with her hammer on many occasions when the attention is unwanted.

It is revealed in later editions of the comic that White Mage is, in fact, God, as Sarda, when trying to converse with the Light Warriors, sent White Mage to the beginning of creation, 4 seconds before Sarda himself turned up.

In one of the later middle comics, Fighter unwittingly broke her mind (while trying to cheer her up and reminding her about how she had never really healed anyone effectively), and made White Mage, in Black Mage's own words, into an "avatar of death," although the only evil things she did were, calling Fighter dumb, wasn't really a bad thing so much as telling him the truth, and kicking Red Mage, which Thief did also. Also, the white part of her sprite had been recolored black. Ironically, she still didn't have feelings for Black Mage. Another pep talk from Fighter (who claimed that her attempts at evil were more pathetic than her attempts at good) changed her back to her old self and she then kissed him on his hair.

However, as soon as she made her way over to the Temple of Fiends, she was immediately stabbed by a tendril of evil summoned by Black Mage, and was seemingly mortally wounded before possibly being healed and then teleported out by Red Mage as Fighter and Thief gave up their lives to protect and stall for time.

Later she came with Priest, Shaman, and Healer in Episode 1221 and killed Chaos, proving Black Mage wrong about having 4 White Mages.

Relationships With Other Characters[]

Black Mage Evilwizardington: Black Mage has been known to have a crush on White Mage, although she rejects him on every occasion. Even so, she does show compassion for BM's affectionate side, which is rarely seen. Despite vowing to heal, she carries a large hammer which she has used on Black Mage multiple times.

Black Belt: Before his death, Black Belt was her bodyguard, though their relationship was mostly professional. However, she was distraught over his death, and briefly questioned her beliefs when her attempt at restoring the statue of Black Belt (whose head had partially eroded) failed spectacularly.

Fighter McWarrior: White Mage views Fighter's behavior and mannerisms as naive and childish. White Mage believes he views her as an older sister at best, and it's doubtful if she's aware of Fighter having a crush on her.

The Many Looks of White Mage[] 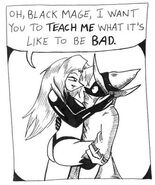