X-017 is the main character in the Warbot in Accounting series. "He" is a warbot that possesses artificial intelligence that was built for war but has since entered the workforce, and works at Weyland Accounting. 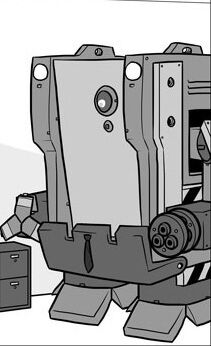 Warbot is a very silent character. It is claimed on the Warbot in Accounting FAQ that it "talks the same way that guns do" although this has not been seen as yet. Due to a lack of social ability, he is very lonely and spends most of his spare time trying to make friends or finding a soulmate. His attempts of making a relationship, however, always goes wrong, as his girlfriends either dump him, or in one case, are killed. He is also very heavy handed and often smashes things, including a fax machine, rollerblades, and people's feet (though he seems to be able to use a keyboard without breaking it). This flaw even, in one case, causes an employee to get fired, causing him to kill himself, his wife and his children. Despite all these shortcomings, he does seem to get on well with his workmates at Weyland Accounting. However, as the comic goes on and he goes through girlfriends, and attempts to volunteer with the elderly, he soon grows more and more depressed. In Warbot_009: The Yutani Account he attempts suicide after proclaiming he gets "No love", but he seems to be indestructible and survives the fall.

Brian Clevinger stated that Atomic Robo is Warbot's role model, as seen by the multiple cameos in his cubicle. Robo is the complete opposite of Warbot, as he is very successful and has a lot of friends to rely on.

Since they did possess intelligence, A.I. Rights Activists argued that the warbots should not be thrown away and therefore should undergo rehabilitation. Some time later after rehabilitation, the warbots entered the workforce. This move has been deemed a successful one, with one warbot, named X-003, was elected as governor of California.