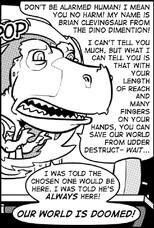 "I just read the last Warbot script Brian wrote. This is the first time milk has actually shot out of my nose. It kind of stings"
—Zack Finfrock, on Twitter

Zack Finfrock is the artist for Warbot in Accounting, working alongside Brian Clevinger. He is a freelance artist from Florida who specializes in commissions. On his blog, which is now defunct, he posted a short-lived comic about his life, titled Flavor of the Week. The first episode, part of which is shown to the right, includes a joke about Brian's self-proclaimed inability to draw. He has done some t-shirt artworks over multiple sites, and has inked and drawn featured guest comics for various sites, webcomics, and in particular the print comic, Atomic Robo. He seems to be very good at imitating the style of Scott Wegener, and has primarily drawn digitally with a tablet and Photoshop. He had developed an interest in acting and independent filmmaking, and so became a part of Wayside Creations, a production group, and also debuting in the webcast sitcom, The Crew, working as the Production Designer and playing temporarily as Crewman Anderson. His performance in this webseries nominated him a 2010 Streamy Award for Best Visual Effects.

He is currently the host of IndyMogul's BackyardFX, a DIY program for independent filmmakers. He currently resides in Hollywood, California.

Because of his recent exploits, his drawings had become sporadic as of late. He is collaborating with Clevinger once more to create another webcast series, known as Emerson Wild: Monster Hunter, with him playing as the title character.

This article or section is a stub. You can help Sardapedia by expanding it.